e.g. Our handyman is a jack-of-all-trades. He can fix anything.

Meaning: a person who can do many different kinds of work well.

Origin: a worker who is capable of doing many craft-type tasks well (painting, electrical work, plumbing, and so on) has been called a jack-of-all-trades since the 1600s. Jack is an informal word for trade laborer. A longer version of this expression is a jack of all trades and master of none, which means someone who knows how to do a lot of things pretty well but who is not an expert at any of them. The longer version started being used in the latter half of the 19th century.

Paris, 1927. Marya (Isabelle Adjani) is left broke when her art dealer husband is convicted of theft. H.J. Heidler (Alan Bates), who wants Marya to become his mistress, invites her to stay with him and his wife Lois (Maggie Smith). 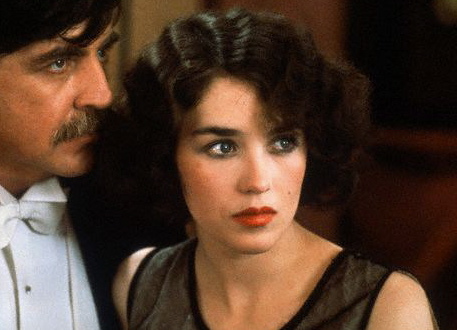 The movie depicts an era that seems so long ago; when a woman had to rely on a man to survive. The performances are good –Maggie Smith is exceptional- but the movie lacks pace. I would also appreciate a deeper analysis in the characters’ psyche.

e.g. Mario loves to be in the limelight. Wait until he sees his picture on the front page.

Meaning: at the center of attention.

Origin: All theaters today have powerful electric spotlights that throw bright beams of light on featured performers. In many theaters, beginning in the 1840s, the beam was created by heating lime, a form of calcium oxide, until it produced brilliant white light. A strong lens directed it onto the dancer, juggler, actor, or singer on stage. Anyone in the limelight was the center of the audience’s attention. Today, we say that a person who gets a lot of attention, especially from the media, is in the limelight.

e.g. It takes two to tango. Who was your accomplice?

Meaning: two people are required to accomplish this deed.

Origin: In the United States in the 1920s, the Latin American dance called the tango became popular, and so did this expression. Just as it takes two dancers to do the tango, there are certain activities that need the cooperation of two people in order to work. For many books, one person writes the words and another draws the pictures. There are a lot of other activities in which it “takes two to tango”.

Cathy (Julianne Moore), a perfect ’50s housewife, is living an all-American family life which unravels when she realizes Frank (Dennis Quaid), her husband, is homosexual and she is in love with their African-American gardener Raymond (Dennis Haysbert).

This stylized movie addresses 1950s taboo issues like homosexuality and interracial relationships which still face prejudice in some societies. Julianne Moore’s excellent emotional portrayal of an ordinary woman earned her an Oscar nomination.

Survivor is a popular television show in many countries around the world. On the show, two teams of contestants compete over a period of several weeks, with a member from one of the two teams being removed from competition each week. The final person in the competition is the ultimate winner. Sharing a certain similarity with the television show, my version can work especially well with large classes.

First, divide the class into equally sized groups. About five or six members per group would be ideal. The teacher will distribute a selection of cards to each group, instructing the members not to read them aloud or let other groups see the cards. Each card will pose a different task, ranging from such things as describing the current weather to giving advice to someone with the flu. After determining which team will go first (if one team has fewer members than the other, the smaller team should begin), the first team will choose one member of one other group and pose one of their tasks to that member.

The teacher will be the judge of whether the answer is adequate. If an answer is not adequate, the respondent is removed from competition (seated in another area of the room), and the first team can proceed to their next target. If the answer is adequate, no one is removed, and the group whose member answered now gets to pose a question to another group. The goal being to eliminate all the members of all the other groups.

This exercise is a great way to review large amounts of practical English. Not only can the competitive atmosphere make for an engaging review session, but this activity, can remind students of the scope of what they have studied. The teacher can choose just how strict the environment will be. For example, perhaps only the respondent is allowed to answer, and if any group members assist, they are both eliminated. I would suggest eliminating anyone for using a language other than the target language.

Glancing through 75 ESL Teaching Ideas by Hall Houston, I found an activity which I decided to adapt for my own classes. Houston suggests (no.5) Ask students to write one question they would feel comfortable answering (without writing their name) on an index card. Collect all of the index cards, put them in a bag, have students draw cards, and then ask another student the question on that card. However, knowing my students, I expect that there would be a large percentage of questions such as What’s your name? Therefore, I have modified the activity as follows.

First of all, class introductions should be made so that everyone knows each other’s name. Instruct your students to choose one person who they would like to ask something special. And then have them write this person’s name, and the specific question on an index card. Collect the cards. Re-distribute the cards to other students. Each student must address the question he or she has to the person to whom it was intended by the author. Whether some authors end up asking their own questions or not is not of importance, as everyone will assume that they have someone else’s question.

The goal of this activity is to produce interesting, specific questions which can stimulate further exchanges. Remember to allow students to pursue any follow-up questions and discussions that may result, since the object is not to read all of the questions, but to promote dynamic and spontaneous speaking in English (or other target language).

Have students supply you with the titles of some favorite or famous songs. If the titles are in a foreign language, work together with the students to translate the titles into English. Write all of the titles on the board. You will need between eight and a dozen or so titles. The more the better.

Next, have the students form groups, and instruct them to use as many of the phrases on the board as possible, with no further alterations of editing, and construct a short conversation. They may add text around the titles, such as subjects, question words, etc., but the main text of the product should reflect the titles. As you might suspect, this activity can be hit or miss. But given the propensity of younger students to gravitate toward love songs, this can result in some interesting composites.

Student Alex Browning (Devon Sawa), while on board for his school trip, had a vision that the plane would crash. Alex and other six people got off the plane to witness it explode on air. They have survived. But have they cheated death?

Although a thriller, it is not like you are at the edge of your seat all the time. However, it does offer a couple of agonizing deaths. The story’s theme is our existential fear of death and a human’s effort to exert control over it.